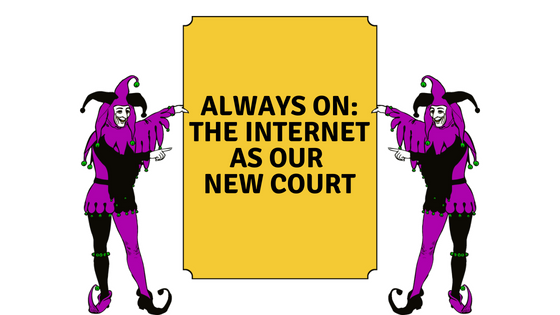 Historically, there was a locale that those with wealth, power, and fame would congregate and be seen – the court. The court was a treacherous place for many because it could cause one to lose favor or standing but it could also garnish one’s reputation as being something more. One’s reputation could be etched into many people’s minds as a true master of wit or a charlatan. The internet has become the court of fools and a public space in which we display our mastery over it.

The court had several key limitations: locale, size, and the “banana phone” problem. The locale would limit the story’s reverberations by reducing how far and wide the story of greatness or preposterous in nature would travel. The fall of historic Empires and the rising of their borders insured that the limitation would be relegated to certain locales. Size specifies how many people could witness this person’s behavior in the court. The act of physically fitting in a space limits the ability for one’s story to directly impact people. Lastly, the “banana phone” problem wherein one person who may have witnessed someone’s actions/speech may embellish or downplay the occurrence. This miscommunication alters the worthiness of how the world is going to perceive the person. The process of mythmaking begins in the eyes of others and ends in the ears of others.

Now to modernity, seeking “virality” or the generation of memes has enabled a praise far louder than what was previously capable. The concept of memes comes from the Greek term, memetic or duplication. This concept was originally attributed to ideas that were easily transmitted to other people and would “latch” into their thinking process. This has generated into a field of study, Memetics, which seeks to study the traits by which information spreads. It has prompted a huge group of individuals debating over the sociological elements but I am seeking to discuss the impact on public perception.

Now that the internet has pervaded into almost every facet of our lives it has generated a new court and proceeded to intensify the memetic rate. This court eliminates some of the restrictions that previously existed. For instance, the locale has expanded to a digital terrain that only has bounds in the technology. No longer are words limited to the walls of a building. There are billions of people with access to the internet and are not restrained to the confines of the small physical court. Surprisingly, the “banana phone” problem or the misinterpretation problem does still exist. Often people can skew the information provided to suit their beliefs or agenda.

Regardless, let’s talk about the how the internet has promoted a new court. Those who maintain a savvy grasp and a penchant for wit will reap a strange world of internet prestige. There are generally two types of internet prestige: “shit-posting” and persuasion. The former seems to focus on the power of the internet to generate hilarity. The latter is a focus on presenting the facts in a way that that pulls others towards a cause. In the recent months, we have seen the utter failure of one group, NRA empowered individuals, and the mastery of the court by the Parkland shooting survivors.

The NRA has attempted to declare war against these students in various ways. By going on Fox News and speaking out at their own convention in order to say that mental health is the main cause for gun violence – particularly school shooting. Then came the generation of the internet to prove that the ability to “shit-post” and be politically persuasive don’t have to be separated. They drew everything up from main NRA spokeswoman Dana Loesche’s past where she sold bizarre beet infused supplements to pointing out the hypocrisy of the NRA convention being a gun free zone.

The NRA did not have a good showing in response. It has been mostly threats and tired talking points while the spotlight and favor of the court remains heavily with the youth. There is a mastery found in the young that has been lost by other groups. The NRA was already struggling with gaining the favor of the internet by making terrifying videos about how the “media” and Black Lives Matter movement was going to essentially kill your entire family. Between that they made some wonderful videos that are laughable about “liberal” media – including one where the NRA spokesman puts WHOLE lemons into a blender to make lemonade. Whole lemons. Rinds on and all.

The youth have successfully managed to pull the court out into the world. Recently, they had die-ins at Publix because Publix provided a donation to a pro-NRA representative that caused Publix to withhold giving any further donations. I believe their mastery of the court will only lead to more outward political actions. Though since the court can be fickle, we will see if it continues to translate to a success. Also, if the NRA does learn to use the internet better, they may gain some appeal. They are very far behind and one slip-up leads to backward trending for all involved. I can’t help but want them to fail. Their history from a small gun safety group to outright lobbyists of Death should be highlighted over and over again. With the adeptness of the youth, there is a good chance that they live a long time with the knowing glares warranted for jesters.